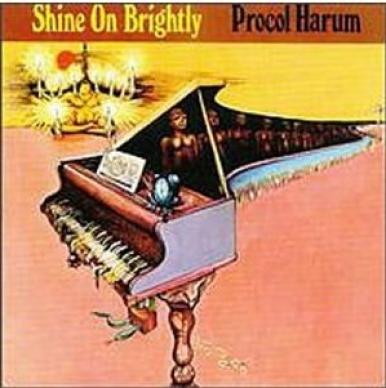 In Held 'Twas in I

Song lyrics Procol Harum - In Held 'Twas in I

a) Glimpses of Nirvana

In the darkness of the night
Only occasionally relieved by glimpses of Nirvana
As seen through other people's windows
Wallowing in a morass of self-despair
Made only more painful by the knowledge
That all I am is of my own making...

When everything around me, even the kitchen ceiling
Has collapsed and crumbled without warning
And I am left, standing alive and well
Looking up and wondering why and wherefore

At a time like this, which exists maybe only for me
But is nonetheless real, if I can communicate
And in the telling and the bearing of my soul
Anything is gained, even though the words
Which I use are pretentious and make you cringe
With embarrassment, let me remind you of the pilgrim
Who asked for an audience with the Dalai Lama

He was told he must first spend five years in contemplation
After the five years
He was ushered into the Dalai Lama's presence, who said
'Well, my son, what do you wish to know?'
So the pilgrim said
'I wish to know the meaning of life, father'

And the Dalai Lama smiled and said
'Well my son, life is like a beanstalk, isn't it?'

Held close by that which some despise
Which some call fake, and others lies
And somewhat small
For one so tall
A doubting Thomas who would be?
It's written plain for all to see
For one who I am with no more
It's hard at times, it's awful raw

They say that Jesus healed the sick and helped the poor
And those unsure
Believed his eyes
- a strange disguise
Still write it down and wipe it red
Nothing's better left unsaid
Only sometimes, still no doubt
It's hard to see, it all works out

b) 'Twas Tea Time at the Circus

'Twas tea-time at the circus: king jimi, he was there
Through hoops he skipped, high wires he tripped, and all the while the glare
Of the aching, baking spotlight beat down upon his cloak
And though the crowd clapped furiously they could not see the joke

'Twas tea-time at the circus, though some might not agree
As jugglers danced, and horses pranced and clowns clowned endlessly
But trunk to tail the elephants quite silent, never spoke
And though the crowd clapped desperately they did not see the joke

c) In the Autumn of My Madness

d) Look to Your Soul

I know if I'd been wiser this would never have occurred
But I wallowed in my blindness so it's plain that I deserve
For the sin of self-indulgence when the truth was writ quite clear
I must spend my life amongst the dead who spend their lives in fear
Of a death that they're not sure of, of a life they can't control
It's all so simple really if you just look to your soul

Some say that I'm a wise man, some think that I'm a fool
It doesn't matter either way: I'll be a wise man's fool
For the lesson lies in learning and by teaching I'll be taught
For there's nothing hidden anywhere, it's all there to be sought
And so if you know anything look closely at the time
At others who remain untrue and don't commit that crime

It's so simple really if you just look to your soul, yeah

Song translations Procol Harum - In Held 'Twas in I